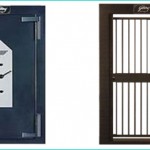 Introducing a new range of Strong Room Doors to help Banks and financial institutions meet their security requirements. The Defender Plus Class – I equivalent of Class M (as per UL 608) doors is recommended for small to medium size safe deposit locker installations. The Defender Plus Class – II equivalent of Class I (as per UL 608) doors is recommended for larger vaults as well currency chests.

The thickness of the overall composite slab is 18mm made of a layer of flame and arc resistant (special) alloy which provides dependable protection against fire and attacks of power drilling, oxyacetylene flame and arc cutting. It is further fortified by a composite 62mm layer of Godrej Double Duty Barrier material. This dual protection is provided over the entire lock case area. The total thickness of protective layer is 85mm over the locks and other vital parts of the door. These Class I doors qualify as TRTL 15 of UL standards and Class ‘C’ as per BIS (IS 11188) standards.

This door has a 25mm slab of Torch and Drill Resistant Matrix Slab. A 65mm layer of Godrej Double Duty Barrier further fortifies this slab, making it virtually invincible from attacks of sledge hammers, hydraulic jack, power drills, torch and oxyacetylene flame. The total thickness of the protective layer over the locks and other vital parts is 105mm. These Class II doors qualify as TRTL 30of UL Standards & Class ‘B’ as per BIS (IS 11188) standards.

Tested quality 10 mm thick M.S. plate is used for fabricating the one piece bent angle door frame. For strength and rigidity the door frame is suitably reinforced along the height and width. A special ‘Solid-­jamb’ is bolted to the frame.

Highly sensitive spring loaded re-lockers on both the locks ensure deadlocking in the event of an attack either mechanically or by use of liquid explosives. The re-lockers are offered dual protection by the TDR Matrix and DDB. The locks are further protected by a drill defeat shield.

This feature offers additional security, in case an attempt is made with the help of explosives or mechanically. This sensitive device gets actuated automatically and the door is deadlocked which cannot be opened.

Locks and re-locking devices are protected by a specially designed drill defeat shield which defeats the attempts to drill open the locks.

To secure the door, 12 shooting bolts (each of 38mm i.e 13/e” dia) are provided, six in front and six at the rear which slide behind the tough “solid-jamb” rebate. The bolts can be activated simultaneously by the movement of the handle.

Attractively designed, convenient to use handles are fitted on an impact resisting shaft which is meant to defeat attempts to hammer it, another unique feature of Godrej Defender Plus doors.

A well-designed grille gate is provided, which is secured with Godrej high precision 8-lever lock, operable from inside as well as outside.

All steel components are given a thorough twelve stage anti-corrosion treatment followed by rust inhibiting paint for greater.

The Defender Class II Strong Room Doors may be classified -TRTL-30 approved and listed by Bureau of Indian Standards (BIS) as CLASS ‘B’.

Please fill out the information below to place an order.